Waaaay back in the dark ages of May 2000, I launched the Honoring Our Ancestors Genealogical Grants Program. Because family history projects are notoriously underfunded, the idea was to give a grant every month to support one such effort, and the intention was to keep the application process simple – and that’s what I’ve done. In fact, all that’s changed is the name of the program – now the Seton Shields Genealogy Grant Program in honor of my remarkable mother.

For a flavor of the types of cool projects I’ve had the opportunity to contribute to over the years, check out the retrospective posts on my blog featuring a number of them (or just go to megansmolenyak.com and search “grants”).

So now – 186 grants later – we’ve reached the 15 year milestone, and after much pondering, I’ve decided on one more change. I will continue to award grants, but on a quarterly, rather than monthly, basis. That said, I will continue to donate as much as I have in the past. So once a quarter, one person or organization will receive three times as much as they would have previously. And the first to receive an award of this nature is the anniversary May 2015 grantee. 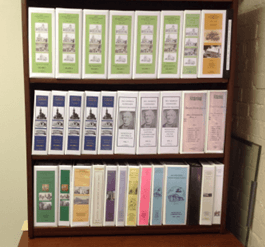 What makes this one especially fun is that the recipient doesn’t even know he’s getting a check because a fellow genealogist named Barbara Munson submitted on his behalf. She explained that for the past several years, Earl Sundmaker has been going to Protestant churches in the greater New Orleans area to ask if he can copy their records. He has discovered records in fire-damaged and mildew-laden storage areas, and even found some in file cabinets stored outside. At his own expense, he scans each page of the books and prints out three copies. The copies go into binders, and one set of binders is given back to the church for their use.

He has also set up a research room at the German-American Cultural Center in Gretna, Louisiana where a set of his church books (see above) is a major draw. Barbara is just one of countless genealogists who have benefited from Earl’s efforts. Thanks to his generosity and hard work, hundreds of years of records are now available, for free, to anyone who ventures into the GACC research room, and a local genealogical society is now working to index these books to make them available online. And Earl is still on a mission to digitize as many records as possible, presently tackling two more churches. This grant will pay for an estimated seven to ten new church binders.