No sooner had Hillary Clinton announced Tim Kaine as her running mate than articles on his roots began to appear – mostly about his inherent Irishness. And there’s good reason for this as he is of mostly Irish heritage – about 80% with the balance being Scottish. And he’s been to Ireland a few times, even visiting the homestead of his Farrell line in County Longford. But what else was there to learn?

I went digging and discovered striking parallels with Vice President Biden’s family history. Both are predominantly Irish (Biden coming in at roughly 63%) with maternal family trees that are entirely so and paternal ones that are slightly more mixed. Both families are also devoutly Catholic. I tripped across a number of references to Kaine’s ancestors as being among the earliest and/or longest parishioners of assorted Catholic churches, and at least two branches produced priests including one who resides in Wichita today. And both are descendants of mostly Famine-era emigrants – though in Kaine’s case, it was his surname line that would bring up the rear when his Kaine great-grandfather arrived in the 1880s. In fact, on his father’s side of the family, all his great-grandparents were immigrants, while on his mother’s side, all his great-great-grandparents were immigrants.

And the geography in play? In the United States, it’s mostly Kansas and Missouri, with supporting roles played by Illinois and Iowa and a sprinkling of other states. Once you cross the pond to Ireland, he has roots in at least Cork (Wallstown/Castletownroche), Dublin, Galway, Kilkenny (Mullinakill, Tullogher), and Longford (Derryad, Killashee). In Scotland, it’s the vicinity of Glasgow that holds his past, my favorite being the charmingly named Paisley. And while there are additional locations to be determined in Ireland, some of what has been claimed is either wrong (e.g., Donegal) or unsubstantiated (e.g., Waterford).

So preliminaries aside, what’s his family’s story?

Many who delve into their roots fixate on ancestors who bore their surname. I’ve been known to bristle at this kind of genealogical myopia, but have to admit that in this instance, it was the Kaine branch that captured my attention – mainly because I saw in their lives a sort of American Downton Abbey. But to be clear, they were the downstairs people.

Alexander Kaine was born in Campsie, Scotland in 1863 to an Irish father and Scottish mother. He emigrated to America as a young man in his twenties and found his way to Topeka, Kansas where he went to work for Erasmus Bennett, a wealthy horse importer and breeder. But he was more than just another employee. Apparently, Alexander had a way with horses, so became Bennett’s foreman.

You wouldn’t think that stable master for a rich fellow in Topeka would be an especially dangerous job, but it was. In 1890, Alexander was attacked – and viciously so – by a fellow who worked for him. If you’re interested in the gory details, I invite you to read the following. For those who’d prefer to skip, suffice it to say that you can do a lot of damage with a pitchfork.

One can’t help but wonder if his injuries didn’t arouse the sympathies of another Bennett worker, Isabelle Potts, because less than a year after the attack, she married him. Isabelle was also from Scotland, and the young couple married in their employer’s home. An announcement in the local paper noted that, “Both … have been with the Bennett family for a number of years, have held responsible positions, and are highly respected by the whole family.”

And this wasn’t just any ordinary house that hosted the Kaine wedding. So grand was it by the standards of the day that when Erasmus Bennett later fell on hard times, he sold it to the state of Kansas to be used as the governor’s mansion, a role it served until 1962. So Alexander and Isabelle, it seems, were the Carson and Mrs. Hughes of Topeka. 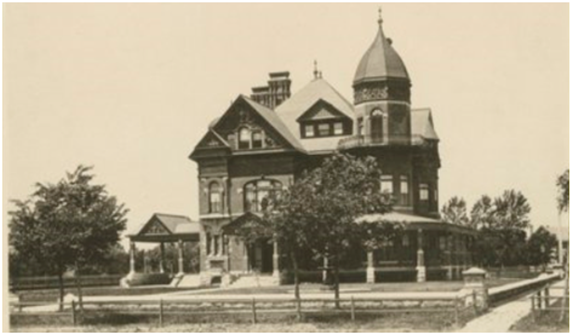 Even after they moved on from the Bennett family, Alexander retained his interest in horses as can be seen from this 1910 record of Mongolien, a Percheron draft horse he owned.

All in all, not a bad start for an immigrant couple, but there was a bit more to the Kaine family tale. Alexander had a brother named Hugh who also came to Kansas where he worked as a blacksmith, but his story took a different turn. He also married a woman from Scotland and had four children, but in 1901, he died. His widow, perhaps overwhelmed at the prospect of raising her family in a foreign country, went back to Scotland.

The widow makes her way back across the Atlantic with four children age six and under (Source: Ancestry.com)

Life doesn’t seem to have been much easier there, though, as she worked as a charwoman to support her brood. But as most families do, they muddled through, so that one outcome of this peculiar detour is that Tim Kaine now has Scottish cousins with Kansas heritage via his unfortunate great-granduncle Hugh. Perhaps one day, he’ll have the opportunity to introduce them to their shared Pottawatomie County roots just as the Irish welcomed his family to their ancestral town of Killashee.

Update: I contacted a tri-generational branch of the family (second cousin once removed, third cousin, and third cousin once removed), including an elderly son of one of the Kansas-born youngsters. Now both Scottish and English, they have scattered geographically and were surprised to learn of this connection to an American VP candidate. Asked about their cousin Tim Kaine, the youngest replied that while she didn’t know him, “This will be a great dinner party fact about the family which will particularly impress my American friends.”