Bruce Springsteen and Barack Obama launch new podcast – Tickled to have traced the roots of both of these men to Ireland! ☘️

I’ve had the privilege of researching a number of Black heroes for the Army. This thread features five of them (this post and the first 4 comments), starting with Capt. Lawrence E. Dickson. Killed in 1944, he’s the first missing Tuskegee airman to be identified.

Name Game: Celebrities Have Nothing on the Rest of Us – “there were a whopping 2,323 people named Paris in the 1900 census, along with New Jersey Cannon, New Orleans Boice, Newark Berkowitz, Prague Sherman, Moscow Beard, Cairo Izard, Munich Miller, and Bombay Pasquale.”

Torchon Portrait de Famille – How’s this for a family portrait?

Philip Reed, The Enslaved Man Who Rescued Freedom – There’s been a lot of coverage over the last month or so about the horrific discovery of tombstones from Columbian Harmony Cemetery, an African American cemetery in DC, being found in the Potomac, and while notables from the cemetery are often mentioned, I haven’t seen any mention that Philip Reed, the once enslaved man responsible for placing the Statue of Freedom atop the U.S. Capitol, was also interred here. And that was *after* he had been moved from another cemetery.

Michelle Obama’s Jumper Roots: Proving Your Freedom Over and Over Again – Imagine that you’re free, but you have to keep proving it. That’s what happened to ancestors of Michelle Obama and countless others.

You know so many have been decluttering during COVID-time? Well, I did a bit of that as well and decided to have a quilt made from a bunch of my genealogy t-shirts, and I’m really tickled with the outcome. If you look closely, you’ll see DNA, companies I’ve been associated with, Ellis Island/Annie Moore, shout-outs to my Irish/Rusyn heritage (including several Osturňa reuions), and assorted genealogy commentary we can all relate to. What do y’all think? 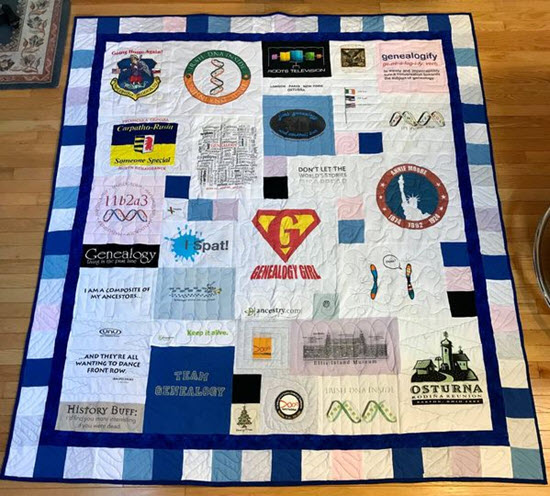