Easily one of the most popular and reliable box office performers today, actress, comedian, producer, and now fashion designer Melissa McCarthy has a lot to be proud of. With a string of hits (Bridesmaids, Identity Thief, The Heat, Spy!, The Boss, etc.) that consistently deliver an enviable ROI, it’s a no brainer that her next one will follow suit because she’s part of the long-anticipated Ghostbusters dream team of Leslie Jones, Kate McKinnon, and Kristen Wiig. While they’re all ghostbusting, I thought I’d do a little ghost-searching – that is, for the ancestors who populate McCarthy’s family tree – and here’s what I learned. 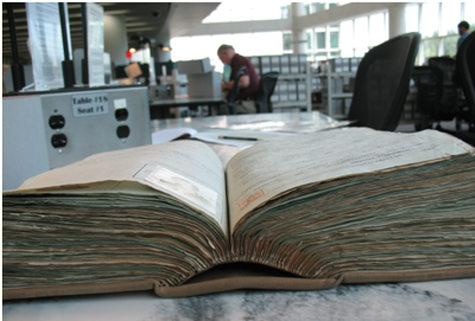 Photos from the passport application of McCarthy’s great-grandmother and her daughters from the book seen here. The little girl on the right in the photo on the left is her grandmother. Source: National Archives and Records Administration

I’ll bring this quick roots overview to a close with a recommendation inspired by the siblings of one of McCarthy’s great-grandfathers. Since a number of names that were once popular are coming back in vogue (Emma and Sophia, anyone?), I’d like to suggest a pair for anyone anticipating twins: Maude and Claude. Or their e-less versions: Maud and Claud. Either way, I’m sure their brother Elza would be grateful.